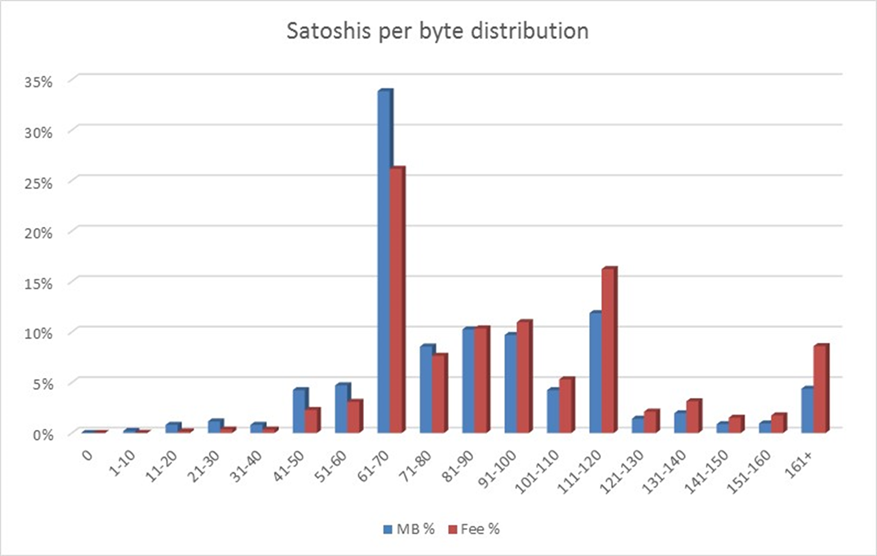 The idea of allowing of allowing miners to increase the blocksize with demand is an interesting one but creates a problem: miners can game such a system by filling the blockchain with transactions at zero cost.

Asking miners to pass on a portion of the transaction fees to the next block would solve this problem as the miner would then incur a cost. Unfortunately this introduces a new problem: miners are incentivised to accept fees away from the blockchain (out of band).

What if there were a way that could not be manipulated without an economic cost to the miner for doing so?

I decided to do a little analysis of the last 24 hours worth of transaction fees:

I collected data on evening of 10th January 2017 . The transaction data came from https://bitcoinfees.21.co/.

I used an average transaction fee of 462 bytes from here, and also had to average out satoshis/byte groups. Despite multiple data sources and rounding I was happy with how closely these calculations tallied up with the 24 hour stats at https://blockchain.info/stats:

What does the data tell us?

This shows how the fees generated and capacity used were distributed:

The cumulative BTC column in our chart shows us that the median economic fee is around 90 satoshis/byte.

I wondered if we could use this data to generate a threshold to calculate whether the network is ready for a block size increase.

Let’s say we need blocks to be considered 75% full for miners to activate an increase.

If we did that currently there is no cost to the miners to fill every block with transactions and force an increase as they get all the fees reimbursed.

What if we discounted all transactions of a fee below half the economic mean for the threshold? That would equate to around 45 satoshis/byte.

From the table we can see that around 95% of transactions are above this level. Since the blocks are consistently over 95% full at the moment and we’re counting 95% of the transactions toward the threshold, 0.95 * 0.95 gives us a figure of over 90% – well above the required level.

How could we stop miner manipulation?

Well, technically we can’t. We can disinsentivise manipulation by making it expensive though.

I’ve taken the original figures and reduced them by 25% to simulate less full blocks. I’ve then filled this freed up space with the cheapest but non-free transactions. This shows what it would look like if miners themselves tried to fill blocks with cheap transactions to activate a block size increase. 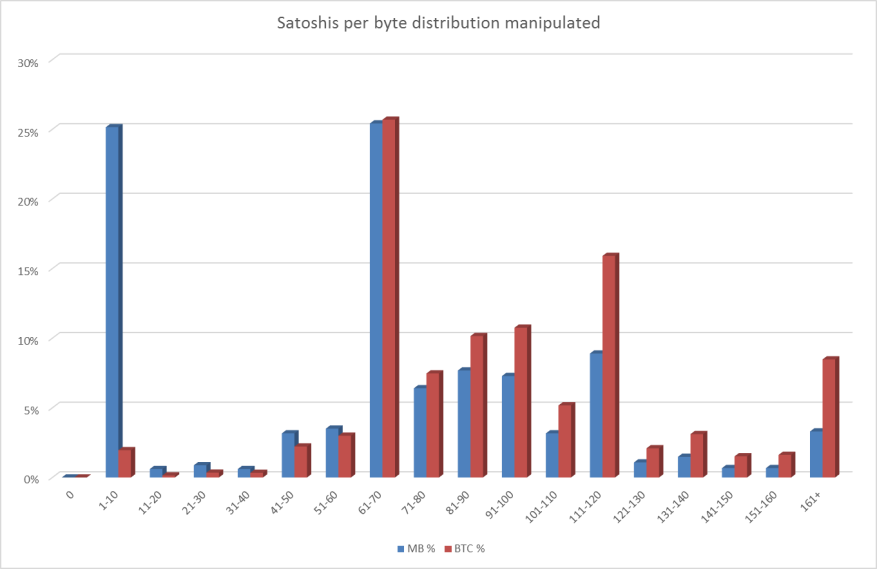 As you can see the manipulation is obvious but the protocol cannot see charts. We need to calculate how full the blocks would be considered for activation purposes in this scenario.

Since 25% of transactions are in the 1-10 satoshis/byte group they are discounted from the calculation.

Getting to the point

There are benefits to allowing miners to signal for block size increases. It’s quicker and less risky than hard forking each time for a start.

The problem of miners accepting fees out of band to avoid paying to signal for an increase can be completely mitigated – if miners do not vote for a block size increase they can keep 100% of their transaction fees as normal.

If there is consensus, miners passing transaction fees to the next block will average itself out. Only miners who consistently signal for a block size increase against consensus will incur an economic cost.

Signalling to increase the block size while simultaneously receiving fees out of band is counter-productive as those transactions will not count towards the reaching the activation threshhold.

While it may superficially appear the case, zero and low fee transactions are not punished under this implementation. They are effectively just factors in a scoring system when miners are suggesting additional block space is required.  Remember that miners currently cannot signal for an increase at all, so this does not alter any fundamentals or discourage low fee transactions when there is capacity.

Thank you for reading, let me know any thoughts in the comments!