TLDR: Due to a flawed emergency difficulty adjustment at its creation, Bitcoin Cash is now running ahead of the Bitcoin blockchain. Since future supply ‘halvenings’ should occur around 48 days before the Bitcoin network, it creates a window where it is ‘half price’ to 51% attack the network. The mere threat could cause the value to fall in anticipation, creating a feedback loop that makes such an attack increasingly inevitable and its outcome even more devastating.

Supporters of Bitcoin Cash (also called BCH and bcash) love to talk about a hypothetical “flippening”, a scenario in which a rise in the value of BCH would see miners switch away from the main Bitcoin blockchain causing the block production speed there to slow. They believe that with the Bitcoin blockchain operating at capacity, the network performance would suffer thus further reducing the value of Bitcoin and increasing the value of BCH which has a higher onchain capacity.

This, they speculate, would create a feedback loop, ultimately resulting in the Bitcoin blockchain completely grinding to a halt as miners jump ship for the more profitable BCH chain which would rise triumphant and replace Bitcoin as #1 cryptocurrency.

This is all pie in the sky fantasy, completely misunderstanding the complex and mature ecosystem that has formed and the incentives of those who operate within it. It simply will not happen. I am simultaneously amused by and feel bad for those who invest heavily in altcoins in the naive hope a flippening in value will occur.

However, there is a flippening of sorts looming for BCH that I have not yet noticed any consideration given towards.

To uncover why this may create a problem for BCH we must look back to its creation. In order to deviate from the Bitcoin network and create a new version, it underwent a process known as a hard fork.

The main rule change was to increase the block size, however as the BCH developers knew there would likely not be much support for their fork they also added a bit of code called an emergency difficulty adjustment (EDA). This is because the difficulty determines how frequently new blocks are created. If you reduce the volume of miners without reducing the difficulty, block creation can take a much longer time. Losing 80% of the mining hashrate would result in blocks only being created every 50 minutes instead of 10, and consequently the mechanism to readjust difficulty every 2016 blocks could take as long as 10 weeks instead of the usual 2. The EDA meant that instead of adjusting the difficulty every 2016 blocks it could readjust down based on just the last 6 blocks.

As with many ‘simple’ changes, this had major unintended consequences as it created an incentive for miners to collectively hold off on mining until the difficulty was really low, and then suddenly start mining blocks again really quickly at high profitability. This caused huge fluctuations in difficulty and at times made the BCH network grind to a halt while no blocks were being created, while at other times they were being churned out in seconds.

The BCH network had no choice but to introduce yet another hard fork to fix the difficulty adjustment algorithm. Hard forks require that every single participant on the network upgrades their software or gets kicked off, so handing them out like Oprah gives away cars is not ideal. 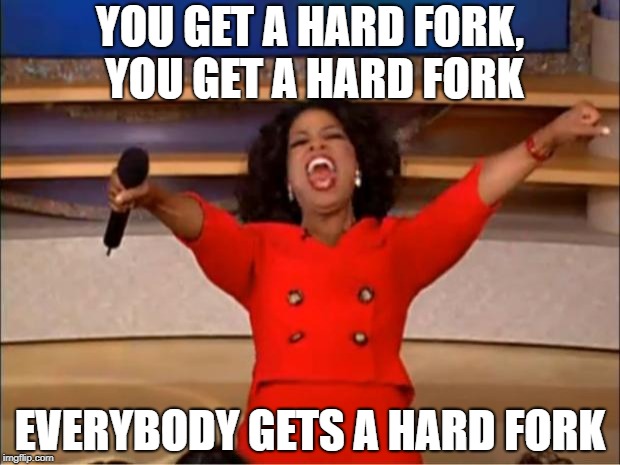 By the time the problem was resolved, the BCH block count had rocketed ahead of the main Bitcoin blockchain.

At the time of writing, BCH is on block #541236 while Bitcoin is on block #534392, a difference of 6,844 which at 10 minutes on average means that the BCH halvening is currently expected to occur approximately 48 days before it does on the Bitcoin blockchain.

At that point, the reward for creating a new BCH block will fall to 6.25, while on the Bitcoin blockchain it will remain at 12.5 (plus higher fees).

The market currently values BTH at around 10% the value of a Bitcoin and the hashrate roughly correlates with the price.

That would mean, at current prices, to mount a 51% attack on BCH would require just over 11% of the Bitcoin hashrate switching over to make that attack.

For a 48 day window in 2020 (and then every 4 years) that dynamic will change, and the cost to attack the network will suddenly halve. Suddenly just 6% of the Bitcoin hashrate would be sufficient to mount a 51% attack against BCH, well within the capabilities of a number of mining pools.

There are a number of ways to ‘short’ cryptocurrencies. Shorting is basically betting that a value will fall, and profiting if it does. Anyone mounting a 51% attack successfully would cause the value of that cryptocurrency to fall, with shorting creating an easy opportunity for them to profit.

A 51% attack itself provides other opportunities for an attacker to profit, most notably through a double spend attack. This could be achieved by depositing a large quantity of BCH onto an exchange, converting and withdrawing them as something else, and then reversing the original transaction so the exchange is out of pocket and the attacker keeps their original BCH.

However an attacker chooses to profit from a 51% attack, the outcome will almost always be a fall in value of the cryptocurrency as people lose both trust in its security and their money.

These rough figures are based on a BCH/BTC rate of 0.1 and ignore the even higher fees available on the Bitcoin network. Since the value of BCH has already been falling for some time it could easily be much lower by 2020. This means an attack would become even cheaper and even more likely.

The increased risk of a 51% attack during period is likely to decrease the price in anticipation of it. This could create a feedback loop where the increased risk caused by the price falling causes the price to fall even further. Miners could engage in all kinds of game theory here: merely hinting they are considering attacking the network would likely cause a downward pressure on price making the cost of an attack even lower.

In summary, hard forks are risky and can introduce a whole host of unintended consequences. While the BCH community may now think their difficulty adjustment woes are behind them, there may be other nasty surprises lurking ahead.