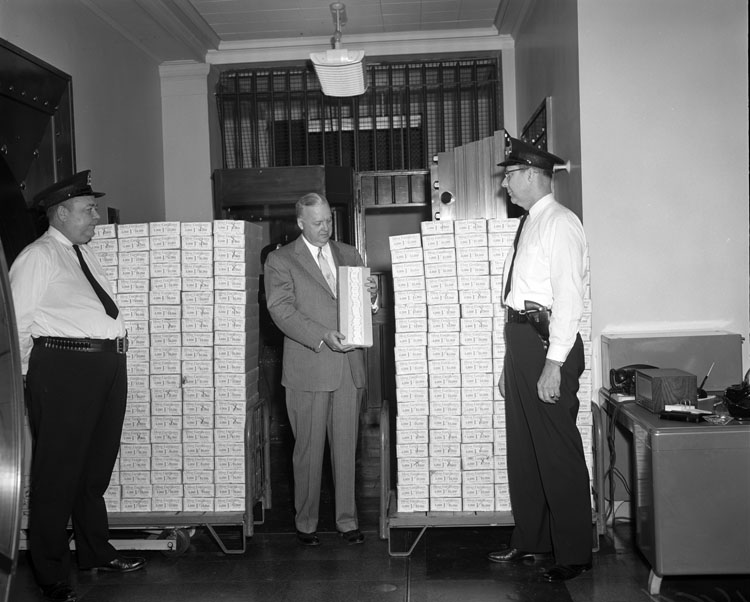 A lot of people think that Bitcoin is a threat to banking, but is it?

Bitcoin does eliminate the need to use a bank, but so does storing all your money in cash. Obviously stuffing a bundle of notes under your mattress is impractical, and all payments must be made in person unless you want to send money through the postal service (not recommended).

So yes, on the face of it, Bitcoin is a threat to banks.

In many other ways though, it isn’t.

One of Bitcoin’s biggest advantages is the ability to transfer money between different accounts for a very low cost. In Europe however, the banks already allow you do this free of charge. I regularly make transfers between accounts that are completed and spendable immediately. Clearly, banks are not making much money out of transferring money. At far greater risk from Bitcoin in this regard are money transfer services like PayPal, Visa, MasterCard, Western Union and MoneyGram.

So how do banks make their money? Well, we have the fractional reserve banking system to thank for that. When you put your money in a bank account, the banks don’t just leave that money sitting there waiting for you to withdraw it. Instead, they go out and sell debt. Credit cards, mortgages, overdrafts, loans… guess whose money the bank is handing over when it provides these products – yours. Obviously the bank leaves some money aside (a fraction as a reserve) to provide a cushion, so that when you want to go and withdraw your money it doesn’t have to say “sorry, we’ve loaned your money to Ms Jones for her new car, you’ll have to come back when she’s repaid”. Although obviously in this system, it can all fall apart if everybody tries to withdraw their cash all at once and the bank cannot get hold of enough money to pay.

When done properly, fractional reserve banking is actually a pretty useful system. Catastrophic problems have historically arisen when bankers have gotten greedy and over stretched themselves. When the banks then run out of money (as in 2008), the governments have stepped in and given them money. How did the government generate this money? By printing more of it!

What does this mean for Bitcoin?

Bitcoin would not mean the end of fractional reserve banking.

Everything the banks can currently do, they could also do with Bitcoin. You would hand over your Bitcoin to the bank, and they would look after it and loan it out to other people.

For any transition away from traditional finance to Bitcoin, It is actually really important that this continues to happen. Imagine trying to buy a house, except you’re suddenly not allowed to get a mortgage and you have to save up the entire cost of the house upfront: there are many situations where debt can be useful.

A transition to Bitcoin will create new challenges for banks. One of those is incentive. One of the incentives to using a bank account is that you trust the bank to look after your money. Having money in a bank account is safer than having it hidden under a mattress. It’s also an awful lot more convenient.

The consequence for this is that banks will have to start competing for your business in other ways – they need your money otherwise they can’t lend it to anyone else. Basic banking services have previously been a major incentive, one that people have been prepared to pay for. Instead, in order to compete, banks will have to find new incentives – this could include features such as insuring your Bitcoin from theft. People are always willing to pay for security, and looking after Bitcoins yourself may feel a little bit like keeping your money under the mattress to a non-technical person.

Another incentive banks can provide that Bitcoins cannot is interest. Many bank accounts already pay interest; the amount they pay is likely to need to increase in order to retain customers. Currently, if you receive 1% interest and a bank goes and loans out your money for 6%, the bank makes 5% profit. Simple right? I have a feeling banks will need to offer a much higher level of interest to attract customers than they currently do.

So the banks will have to adapt to compete, but they’re safe right?

No. Remember the problem of greedy bankers? Well, that hasn’t gone away. In fact, it’s become an even bigger problem. Banks will have to be more cautious to not over stretch themselves – if they cannot rely on the government to print more money and save them (impossible with Bitcoin), the only option they have if they run out of money is bankruptcy!

There are many fascinating scenarios that could occur in this situation, in order to protect fractional reserve banking, it may be in other bank’s interest to bail out a bankrupt bank. Why? A grave threat to fractional reserve banking in a Bitcoin world is people losing trust in the entire system. If a bank offers you 100% interest but you’re scared they’re going to go bankrupt and lose every penny (or bit) you save with them, you’re going to choose the trust and security of Bitcoin.

Unless the banks become super cautious, they’re going to start (well, continue) to fail. The worst part for even the most responsible of banks is that they’re all linked, and they’re only as strong as the weakest. If just one major bank gets itself into trouble and loses its customers their money – customers of other banks are going to get scared. If these customers lose trust in banking and start to panic withdraw their money en masse (and secure it in Bitcoin), the entire fractional reserve banking system could quickly and spectacularly collapse.

Can a leopard change its spots?

Widespread Bitcoin adoption will be hugely disruptive to the banking industry for the reasons outlined above, but Bitcoin alone alone will not spell the end for banking. Those banks that are keen to adapt and evolve can compete in a Bitcoin world. Those that don’t will find themselves going the way of Kodak.

We’ll likely see a shift towards greater transparency: instead of trusting banks (and the government to step in if they fail), customers will want independent auditors to assess how risky the bank is being with their money. Customers could choose to receive a lower rate of interest in exchange for a lower rate of risk.

So Bitcoin alone is not a death knell for the banking industry, but that does not mean they are safe.

Bitcoin isn’t the only technology that threatens to disrupt the traditional banking model. If you want to save money in a bank, you agree on a rate of interest and leave them to it. If they give you 3% and manage to earn 8%, they’ve made 5%.

Another breakthrough technology that is emerging is social lending. We no longer need to ask the banks to match up lenders and borrowers – we can already do it ourselves. In the UK I have used Zopa and RateSetter, they act as an exchange for people who want loans and people who have savings. They take a service charge of around 1%, and match lenders with borrowers – the rate is determined by supply and demand. Instead of receiving 3% interest and paying 8% with a traditional bank, if both parties had used an exchange, they meet in the middle. The lender receives 5%, the borrower pays 6%, the service charge is covered and the banks get nothing.

While Bitcoin alone does not signal the end of banking as we know it, the challenges the banks face are vast and unenviable. One thing is certain, technology will march on whether they embrace it or not.

2 thoughts on “Should the banking world fear Bitcoin?”