We’ve got so caught up in the whole SegWit and Bitcoin Unlimited dispute that there’s something we may all have overlooked.

For either of these changes to be activated requires miner support, of which neither side has anywhere near enough.

What if the reason we’re seeing no progress is because miners don’t want the block size to increase?

While we’re all desperate to see scaling solutions, the miners are sitting there and quietly collecting record fees.

I’ve compiled the fee data over the last 2 years and created 10 day averages of the price in USD.

Here are the results: 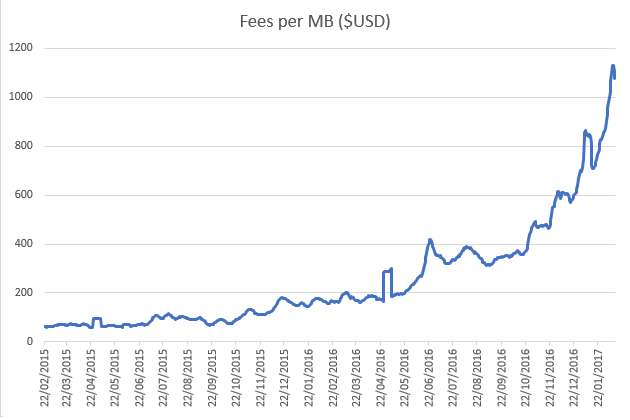 The above graph shows the fees miners receive on average per block.

It also shows what would have happened if the initial rate of $60 per MB had continued as the blockchain grew.

As you can see in the last two years miners have gone from earning fees of next to nothing per block ($25) to now averaging over $1000.

This rate equates to more than $52m extra per year for miners compared to two years ago, as demonstrated by the graph below:

Are the miners happy with the status quo? They sit back quietly collecting record fees while the rest of the community fights amongst itself.

The most recent rate equates to $54m in fees per year. At $1000 per BTC there is currently $657m new Bitcoins created each year. This means fees currently make up 8.2% of miner revenue and is growing exponentially.

Doubling the blocksize would not see fees halve. More likely we’d see fees fall to the rate when blocks were half full. This would see miner fee revenues falling from around $1100 per block to perhaps $70 per block – and we’re asking them to impose this upon themselves!

A real tragedy of the commons may be upon us. It doesn’t matter what scaling option you support if the miners won’t implement any of them, instead opting to accumulate as many Bitcoins as possible until other scaling solutions they cannot impede emerge.

I have my suspicions that on the whole miners currently favour Core, but are happy to exploit the community disharmony and delay on-chain scaling for as long as physically possible. Their actions only heighten the tension and inflicts real damage.

Instead of being divided, let’s unite in putting pressure on the miners. Until we know we can even overcome this obstacle the rest of our debate may be a futile waste of energy.