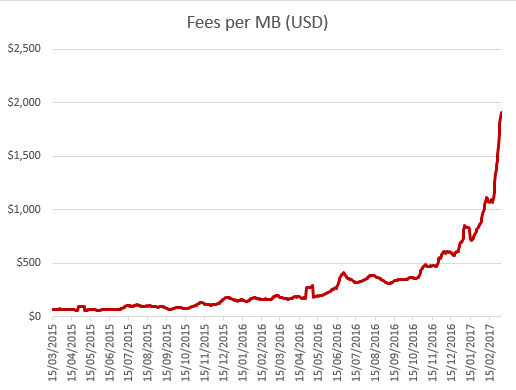 I used to argue that we shouldn’t worry about a lack of fees because blocks were subsidised ‘until 2140’. I thought it would be a problem ‘for the future to worry about’. I figured the world would have changed so much by then that there was no point limiting ourselves now, and that they’d be able to ‘figure it out’.

Then I realised that I was wrong – 2140 isn’t the year to worry about.

In 2028 it will be 1.6BTC, and in 2032 we’ll be at less than 0.8BTC. This reward will continue falling for another 108 years until block subsidies end in 2140 – the year I naively perceived as the time the lack of block reward would become ‘a problem’.

A simple look at the numbers tells us this is something we need to consider a lot sooner.

In February I analysed how much the fees had increased. On 6th March 2015 the average cost over 10 days for 1MB of transactions was $67.

This is supply and demand in action, literally how free markets work. When there is an abundance of something it becomes extremely cheap. When in short supply it becomes expensive.

People argue that if we made the blocks bigger so they weren’t full, the miners would be able to include more transactions so they could receive more reward.

Let’s take an objective look at the facts. The numbers show us that when blocks aren’t full miners have, even in recent years with high Bitcoin value, accepted less than $67 per MB.

Only when the blocks have become full has the pressure on fee prices skyrocketed to $1912 per MB.

This means that at $67 per MB to earn the same fees miners would right now need to be mining 29MB blocks.

Even if this didn’t have centralisation issues, the transaction volume just isn’t there yet to achieve it.

Another argument can be made that the current 12.5BTC reward means this is less of an issue right now – and that is a very valid point. We do have room to increase the block capacity without a short term fear over mining incentive, and we should if the miners will let us.

The concern is that in 7 years time we’re going to be mining blocks with just 3.1BTC of reward. The simple and indisputable fact is that the less reward there is for mining a block the less secure the network is, and this is a problem we’re going to face a lot sooner than 2140.